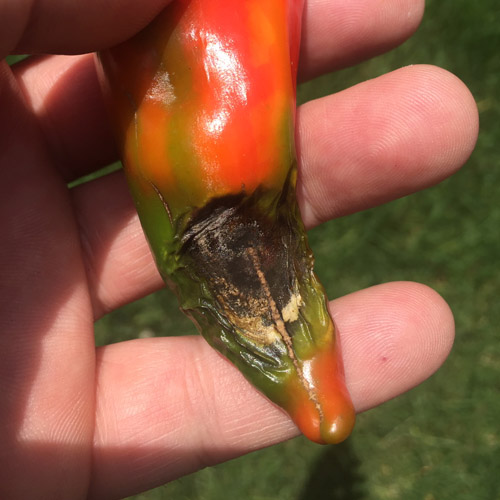 Blossom End Rot or BER is a very common issue for Chilli growers and mostly misunderstood. BER is a Calcium deficiency brought about primarily by erratic watering.

Why the name? The Blossom End of a chilli is what later develops into the tip or apex of the pod. This is the part of the pod furthest removed from the stalk. Rot, because the physical manifestation of the issue appears in the form of a circular rotting/necrotic lesion that is sunken and blackish/brown in appearance. BER lesions start going black due to secondary infections.

BER is brought about as a result of your plant having insufficient Calcium at the growth point when the plant is producing pods. Most soils have adequate quantities of calcium. Which means, your plant is having an issue with availing itself of the calcium in the soil or not being able to deploy the Calcium to the fruit.

Calcium is one of the macro nutrients that your plant obtains from the soil. Most soils contain adequate quantities of Calcium unless the soil is of particularly poor quality. To accurately ascertain whether your soil has any deficiencies, a soil test is recommended to establish the condition of any soil. It is only through soil tests that deficiencies in the soil can be accurately established.

Symptoms first appear as light green sunken tissue at the apex of the pod. This tissue is not infected, but rather this tissue is lacking calcium. Without calcium, tissue has no structure and collapses. These areas of compromised tissue are now the perfect place for pathogens to thrive. These sunken areas slowly increase in size and turn to brown/black as secondary infection take advantage of the compromised tissue. In conjunction with these unsightly lesions, under developed fruit can also change prematurely to its ripened colour.

It is very important to note that BER is quite specific. Many growers will find similar looking necrotic lesions on other parts of the pod and mistakenly diagnose the condition as BER. BER is very specific and is focused at the apex of the fruit (the blossom end). Necrotic lesions elsewhere on the fruit would indicate another issue all together.

While Blossom End Rot by its very definition would suggest pathogens as the root cause, BER is not brought about by pathogens. The rot is as a result secondary infections.

Blossom end rot is quite a common occurrence in the vegetable garden - not just for chillies, but for many other vegetables too. It is easily identified and yet very misunderstood. Faced with BER, advice given is often to give the plant Bone Meal or a refined form of Calcium such as CalMag. This makes common sense, as one would surely give the plant what it is lacking? This may be the case with most other nutrients, but not Calcium. You may have heard it said that Calcium is not "Mobile" in plants? Simply put, this means unlike other nutrients, plants can not deploy calcium to other parts of the plants as needed. Calcium can also not be absorbed by the foliage as Calcium can not pass through the plant cell membrane. Calcium is one of the least mobile nutrients in plants. Now to understand this, we will need to see how calcium is processed through the plant.

Due to the nature of BER and the bad mobile properties of Calcium in plants, supplementing affected plants with Calcium based supplements is NOT the solution. By the time the symptoms of BER manifest, it will be too late for any added Calcium to benefit, alleviate or remedy the effects of BER.

BER is not bacterial, fungal or viral by nature. As mentioned, the rot is due to secondary infections. Many growers will be inclined to treat plants with a fungicide based on the necrosis found on the pods. Fungicides and agents to combat bacterial and viral infections will not alleviate the effects of BER.

To understand Blossom end rot, we have to understand Calcium's function in the plant and its uptake from the soil and how it is transported through the plant.

Most soils have adequate amounts of Calcium for plant growth. It is pretty unlikely that there is a deficiency of calcium in the soil, although this factor can never be ruled out. There is a small chance that your soil is poor or has been over farmed. In which case we would recommend having your soil tested to establish this.

Calcium breaks down in the soil and is absorbed into water in the soil as Calcium Ions. Soil solution containing the Calcium Ions are absorbed into the root system via a "passive" uptake system called the Apoplastic route. It is only the roots newest growth (tips) that are able of taking up Calcium ions. Older roots are not capable of taking up Calcium ions due to a layer of suberin in the Endodermal layer called the Casparian Strip (See illustration below). What this all means in short is that only a small percentage of a plants root system can actual take up Calcium. Calcium ions are also not able to pass through a plant cell membrane (active / symplastic route) like nitrogen, potassium and phosphorus can. Calcium ions have to move in the spaces between the root cells. Which means Calcium ions are much less mobile from the get go.

Calcium is needed by plants for building cell structure. It is also needed for the production of pectate in the lamella (in between cells) that hold everything together. Without Calcium, cell structures and the glue that holds cells together collapse. This is evident in the fruit, where the the flesh at tips of the pods collapse and get infected.

On hot days when transpiration is high. Water is moved by the plant to the growth points that require the most water. This is the new leaves that are rapidly growing. Fruit are covered in a waxy substance and as such transpire less. Further exasperating the reason for water to be moved to the new foliage and not the fruit.

Incorrect Soil pH
Soil pH plays a very important role in general plant health. Soil pH varies from area to area. It depends on soil composition and the general climate in a particular area. You may find that the pH of soil at the bottom of your garden varies to the pH at the top of your garden. The recommended pH range for Capsicum is 5.8-7.2 pH. Soil pH lower than 5.8 and higher than 7.2 pH can cause certain nutrients to be unavailable to your plants.

Inconsistent Watering
Insufficient water can predispose plants to BER. Water is essential for the uptake of Calcium by the roots and the transportation of Calcium to the growth points in the plant. Plants subjected to water stress will have decreased Calcium transported to the fruit and as a result fruits will be more likely to manifest BER. Common reasons for insufficient water are drought, uncontrolled water management via irrigation and possible root damage due to disease or nematodes.

Bone Meal
Bone Meal is a common supplement given to calcium hungry plants by gardeners. It is a very crude source of calcium that has to break down in the soil, before the calcium can be taken up by the plant. This takes time and is not a quick thing. Bone Meal should be added to the soil when planting your seedlings, which gives the Bone Meal sufficient time to break down in the soil and be available to your plant in a few months time. It is a slow release source of Calcium and will not help plants in the short run with any Calcium deficiencies. We advocate the use of Bone Meal when planting your seedlings out early spring, but not as a fix for Calcium deficiency (BER) once manifested.

CalMag / Calcium Nitrate
CalMag (Calcium Magnesium Nitrate) is a very refined form of Calcium & Magnesium. It is more soluble and will be available in the soil quicker.

Remove affected fruit
◦    The rot/necrosis/infection on pods will not spread from plant to plant. The only impact is to the yield and aesthetic quality of the harvest. It is advisable to remove pods showing signs of BER to save plant resources and encourage new pods from setting.

Water management
◦    Consistent soil moisture day and night.
◦    Increased watering during drought conditions and hot days.
◦    Ensure plants have adequate water at night time.
◦    If your plants are in containers and you are struggling to maintain consistent moisture in your pots, look at larger containers. Moisture levels will be more consistent in larger containers.

Soil Sodium
◦    Suspend soluble (sodium based) supplements and use plain water to help flush out salts/sodium build up in the root zone.

There are no products to list in this category.

This product is currently Out-of-Stock. Enter your email address below and we will notify you as soon as the product is available.